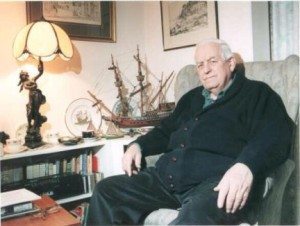 Winchester artist Jim Lovegrove, died peacefully in hospital on Tuesday morning (18th March, 1997) after a lifetime of adventure and travel. He was aged 74.

A man of many parts – soldier, sailor, archives researcher and financial controller – Mr.Lovegrove’s best loved profession was that of artist.

An exhibition of his marine studies ran successfully for three weeks at the Winchester Guildhall Gallery, in December 1995, and he also exhibited at the Bankside Gallery, London, Bell Fine Art, Winchester, and many other galleries in the South.

“I only went back to art in 1991,” he told The Hampshire Chronicle when his exhibition opened at the Guildhall. “I had to work for a living at other jobs for some considerable time.”

The catalyst came when he helped his mother, then in her mid-90s, to move house. Parcelling up some personal effects, he came upon drawings he had done at the age of 12 and thought “they weren’t bad.” One of his daughters suggested he should go back to his “true profession” and he did. 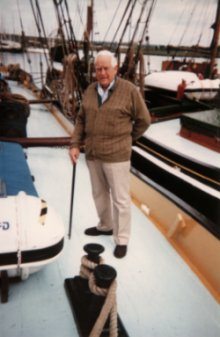 After several successful exhibitions in the South, Chris Bradbury, Winchester city keeper of exhibitions, invited him to stage the exhibition at thc Guildhall. Mr Lovegrove served in the Army in the Far East during the war. He was invalided out in 1945, having contracted malaria, and became an art student. Later, when he married and began to raise a family, it was difficult to sell his drawings and he could not work consistently as a professional artist.

He gave up his art and turned his hand to a variety of other jobs. He worked in forester, was managing director of a shell fish farm, and provided plant and floral decor for outside broadcasts for TWW, the former Welsh television company. He later came to Winchester to work in banking, specialising in unit trust management.

Although he served in the Army during the war, Mr Lovegrove always had a great love of the sea, which he attributed to his mother’s family. They were seamen, ship engineers, and ship captains. He and his wife, Jean, and their family, lived by the sea in Wales for many years and he went to sea for a time, sailing half-way round the world with Bill Tilman, whom he described as the last great mountaineer of the Himalayas, the Caucasus and Africa. When Tilman found he could not climb beyond 20,000 feet without oxygen, Mr Lovegrove recalled, he took to sailing and was a brilliant navigator. 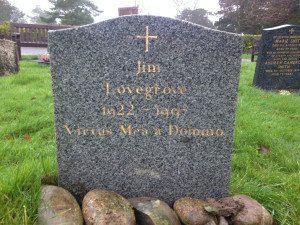 Among all his many jobs and endeavours, which he greatly enjoyed, Mr Lovegrove managed to keep up his drawing and his love of the sea was well-represented in his Guildhall exhibition which was entitled “Sometime a Mariner.” Mr Lovegrove, whose home was in Lower Brook Street, Winchester, leaves his wife, Jean, children Simon, Hannah, Benjamin and Rachel, and grandchildren Kelly, Florence and Hayley.

Letter to the Hampshire Chronicle

Sir, – The many parts played by Jim Lovegrove in the course of his very full life were sympathetically portrayed in the excellent obituary which appeared in last week’s Chronicle.

Banking received scant mention doubtless of this reason but nevertheless it was Jim Lovegrove the banker who accepted a secondment to become the financial director of The Mary Rose Trust. Originally coming to the trust for a two year assignment, in the event he stayed on for almost seven years, seeing the project through from pre-recovery to an advanced stage of conservation.

Based in the Trust’s operational headquarters at the former Bonded Warehouse, in Old Portsmouth, Jim used his ‘connections’ (forerunner of the world wide web!) unashamedly to scrounge everything from the Sleipner cradle, in which the salvaged ship eventually rode to her dry dock, through the then world’s largest floating crane, all in support of the project he had grown to love.

His pragmatism was infectious and as a result minor miracles became the order of the day, not only in the all necessary financial control of the Trust’s meagre voluntary funds, but perhaps more importantly in his support and assistance to those carrying the awesome responsibilities for the decision to go ahead with the lifting operation.

Jim’s part in the on-going success story of the Mary Rose was a major one indeed and his friends form the trust feel such a significant and freely given contribution should take its place alongside the abundance of talent which comprised a full life of this very special character.