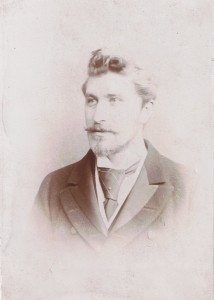 James William Lovegrove was a Master Tailor living and working in London between the 1890s and 1930s.

He began work as a cutter in Worksop, Nottinghamshire, and moved to Battersea after his marriage to Elizabeth Foster in 1892. He was the first President of the Tailors and Cutters Guild. He lived for a time at 76, Bolingbroke Grove, Wandsworth Common, and was the Chief Petitioner of the Allotment Act of 1908.

He designed and made coats, overcoats, jackets, hats, and other garments for the Edwardian motorists (“Motor Clothing” as it was then known). His designs were featured in “Motoring Illustrated” in 1902/03 and copies of which can be found at the Beaulieu Motor Museum in the New Forest, Hampshire.

Later in life, after converting to Islam, he became the Secretary of the British Muslim Society and was an active member of the Woking Muslim Mission.  He wrote the book “What is Islam?” 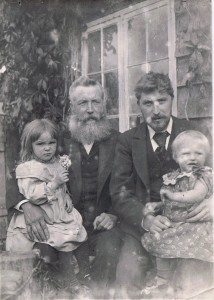 J. W. Lovegrove was descended from the Lovegroves of Wantage, Berkshire. His grandfather was also a tailor, while his father was both tailor and publican.

The picture to the right shows J.W. Lovegrove with his father William James Lovegrove. The two young girls are probably two of his three daughters; Dorothy Blanche, Edith Marjorie, and Kathleen Mary.

Father – William James Lovegrove
Late of “Clovelly”, Newbury Street, Wantage, Berkshire. Tailor and publican. Born in March and baptised on June 21st 1846 in Wantage. Born in Grove and had his first tailoring business there before moving to Wantage in 1869. Sometime Licensee of the White Heart Inn, Wantage. Died 15th February 1913 and burried in Wantage Cemetery.