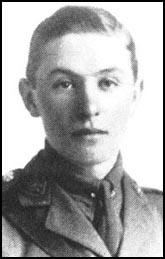 James Leslie Lovegrove was the third son of James William Lovegrove.  He served in World War I as a teenage soldier in France.  In the Imperial War Museum recording below he recalls some of his experiences of life in the Army.  It is a fascinating and touching account of a young man pushed into the unfamiliar surroundings and pressures of a brutal war. 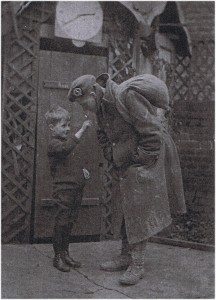 During World War I James Leslie was a 2nd Lieutenant in the Loyal North Lancashire Regiment, Royal Field Artillery.  He was probably awarded the Victory Medal and the British War Medal for his service in France.

In the picture to the left we see James Leslie in uniform with mud on his boots and coat. Perhaps he has been on exercises or maybe he has just returned from France.   He is the the garden of the family home at 76, Bolingbroke Grove, Wandsworth.  One of his younger brothers, probably Philip Lawrence, lights his cigarette.

An interview recorded by the Imperial War Museum.